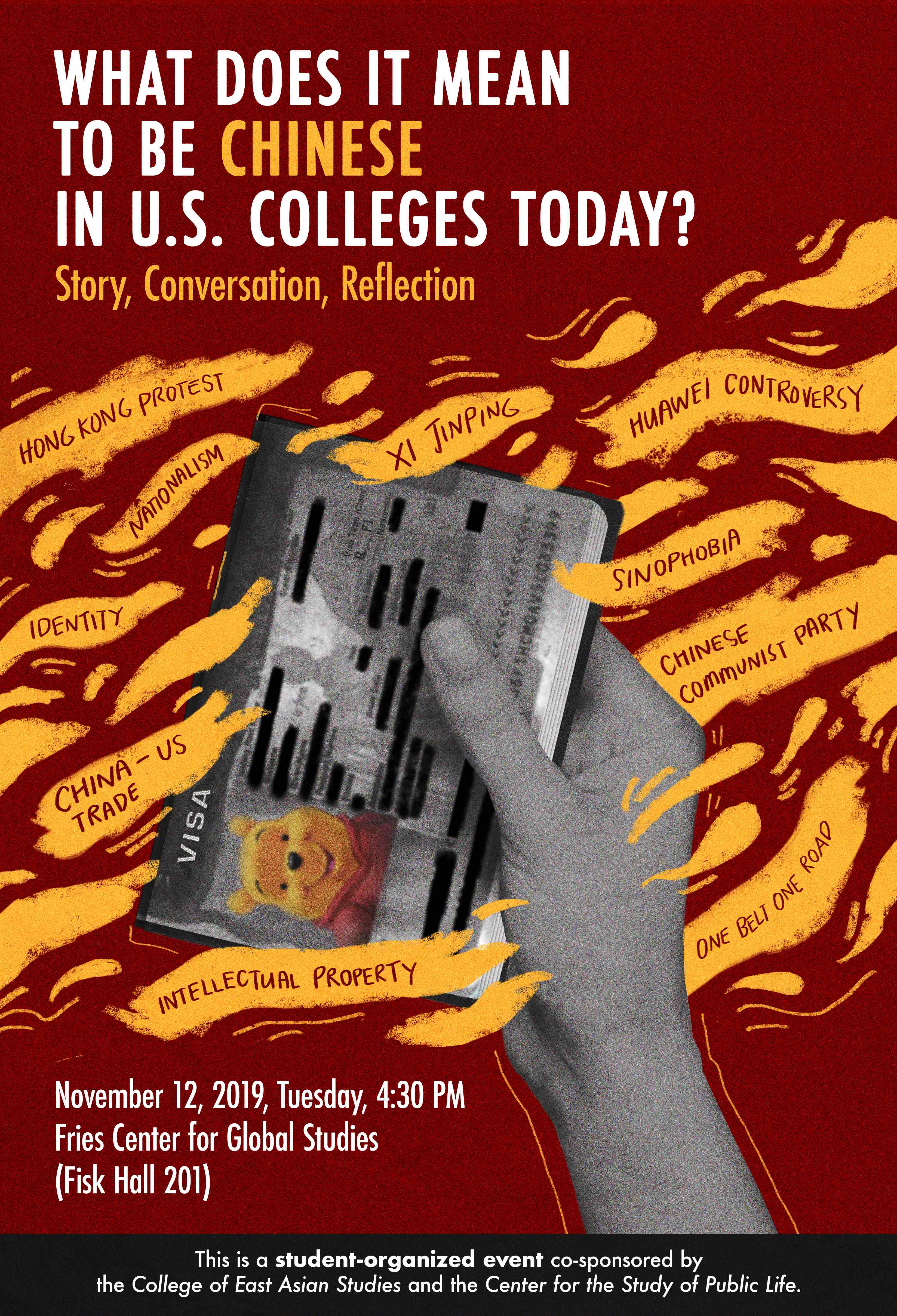 A forum featuring the diverse, complex, and evolving stories of Chinese-identifying students and faculty, be they be born in Mainland China, Hong Kong, Taiwan, Singapore, or New York City, and a safe and intimate space where everyone, regardless of identity, can feel comfortable to share their own and engage with others’ perspectives. Stories will be read anonymously by student volunteers, followed by a discussion moderated by Professor Yu-ting Huang (Assistant Professor of East Asian Studies)

Whether it is the U.S.- China trade war, the Huawei controversy, the Anti-Extradition protests in Hong Kong, or the growing Sino-phobic sentiments in academia and the public sphere, 2019 has not been an easy year to be Chinese in America. Chinese students, faculty, and staff at Wesleyan encounter these challenges in various ways. However, caught between the nationalist propaganda of the CCP and the overly simplistic narrative of Western media, voices from the Chinese community have been largely left out. Often seen as a homogenous, organic whole, the “Chinese identity” entails much complexity on political, cultural, and personal levels that are worthy to be explored, discussed, and understood.

This is why we from the Chinese community at Wesleyan want to make ourselves heard. We want to speak up in order to offer authentic, diverse and nuanced views about our connection and struggle with our Chinese identity, to foster a better mutual understanding with the rest of campus, and to explore common ground on which constructive and respectful conversations can be possible in the future.

There will be no photos, videos, or recording at the event.

Sponsored by the College of East Asian Studies and Allbritton Center for the Study of Public Life. 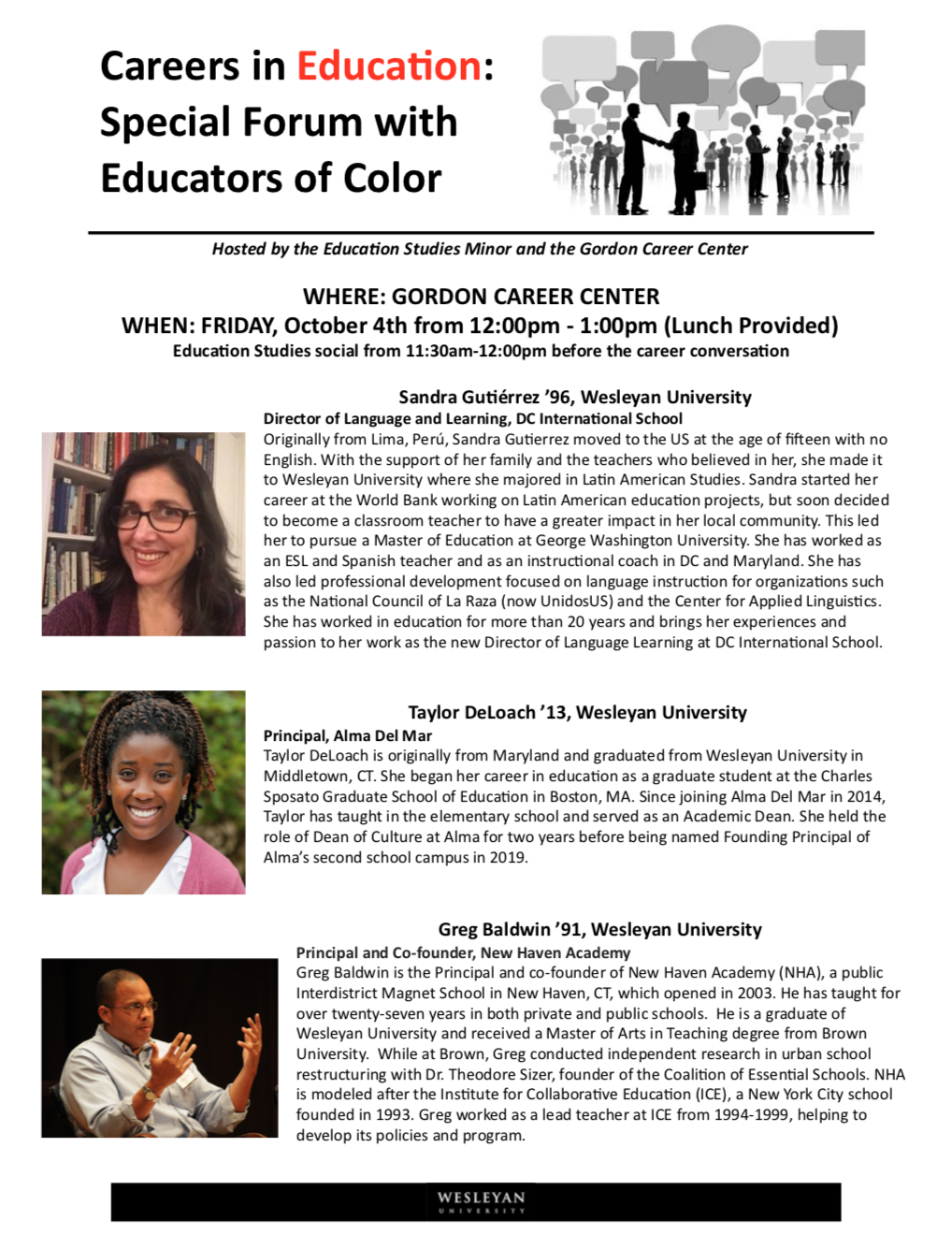 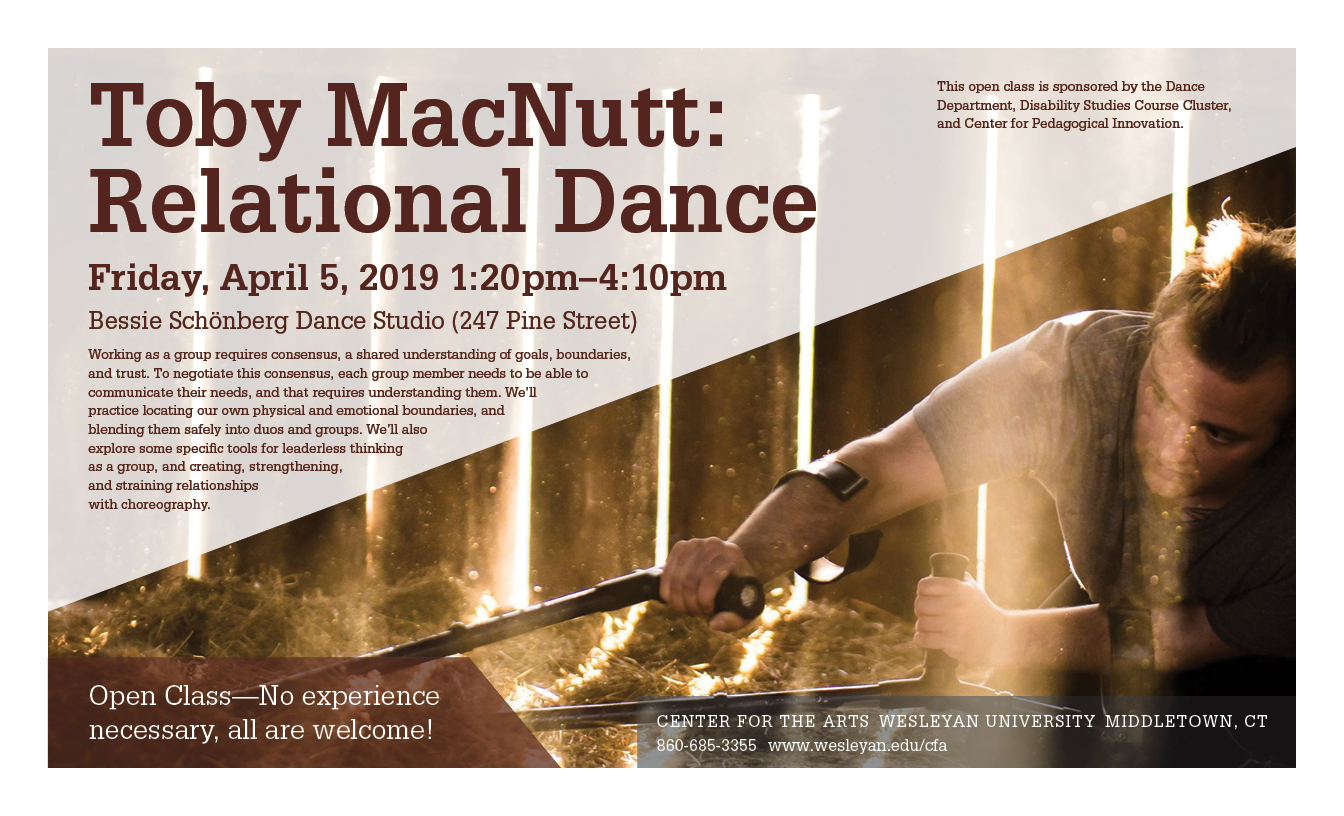 Relational Dance
Open Class. No experience necessary, all are welcome!

Working as a group requires consensus, a shared understanding of goals, boundaries, and trust. To negotiate this consensus, each group member needs to be able to communicate their needs, and that requires understanding them. We’ll practice locating our own physical and emotional boundaries, and blending them safely into duos and groups. We’ll also explore some specific tools for leaderless thinking as a group, and creating, strengthening, and straining relationships with choreography.

This lecture/demonstration is sponsored by the Dance Department and Disability Studies Course Cluster, the Division II Dean’s Office and the Center for Pedagogical Innovation.

BIO Toby MacNutt  https://www.tobymacnutt.com is a queer, nonbinary trans, and disabled dancer/choreographer, author, and teacher living in Burlington, VT. They make dance work for crutches, wheels, ground, and aerial. In June 2018 Toby premiered ENTER THE VOID, a performance installation in the darkness of space, accompanied by a sci-fi poetry guidebook. Toby has been creating performance work since 2014 and has also performed with Heidi Latsky’s GIMP Project, Tiffany Rhynard/Big APE, Nicole Dagesse/Murmurations Dance, and Lida Winfield, among others. 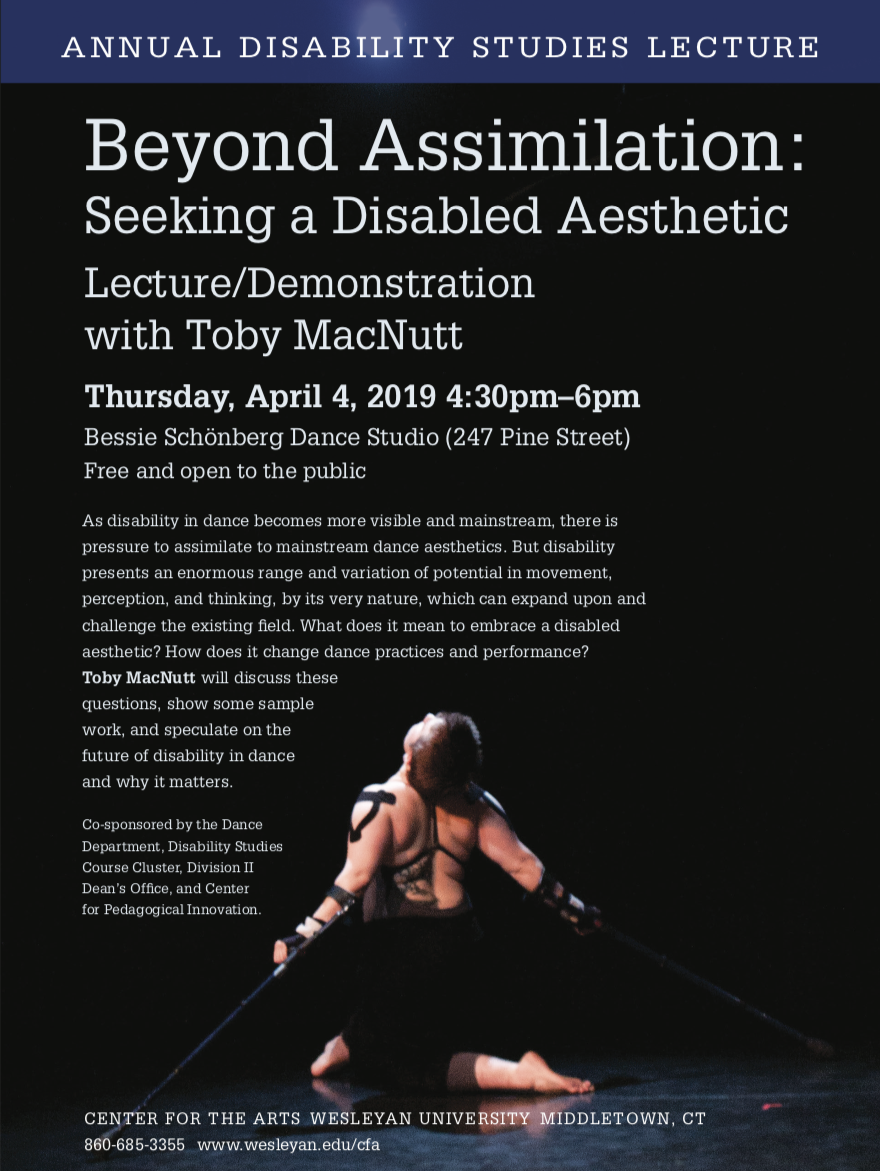 As disability in dance becomes more visible and mainstream, there is pressure to assimilate to mainstream dance aesthetics. But disability presents an enormous range and variation of potential in movement, perception, and thinking, by its very nature, which can expand upon and challenge the existing field. What does it mean to embrace a disabled aesthetic? How does it change dance practices and performance? Toby MacNutt will discuss these questions, show some sample work, and speculate on the future of disability in dance and why it matters.

This lecture/demonstration is sponsored by the Dance Department and Disability Studies Course Cluster, the Division II Dean’s Office and the Center for Pedagogical Innovation. 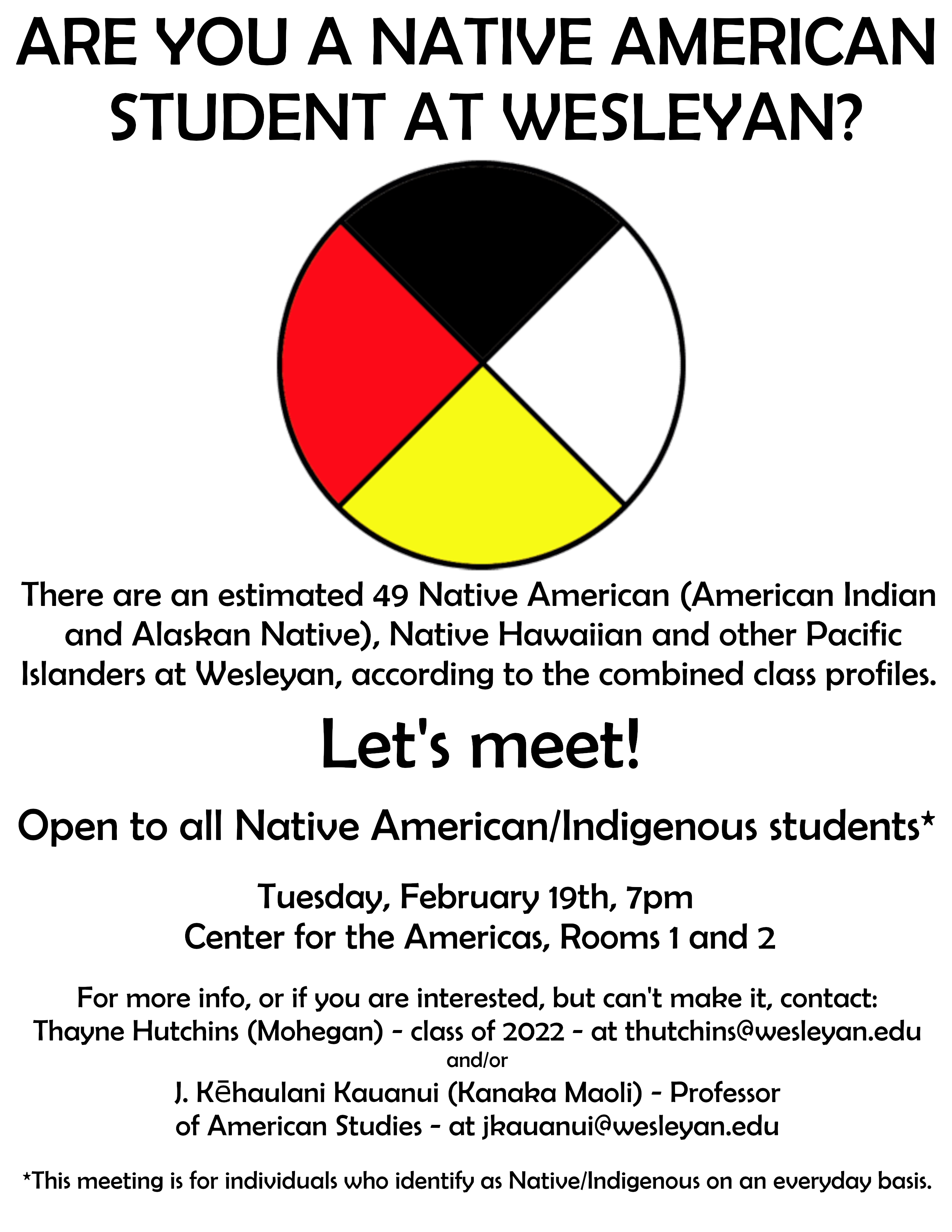 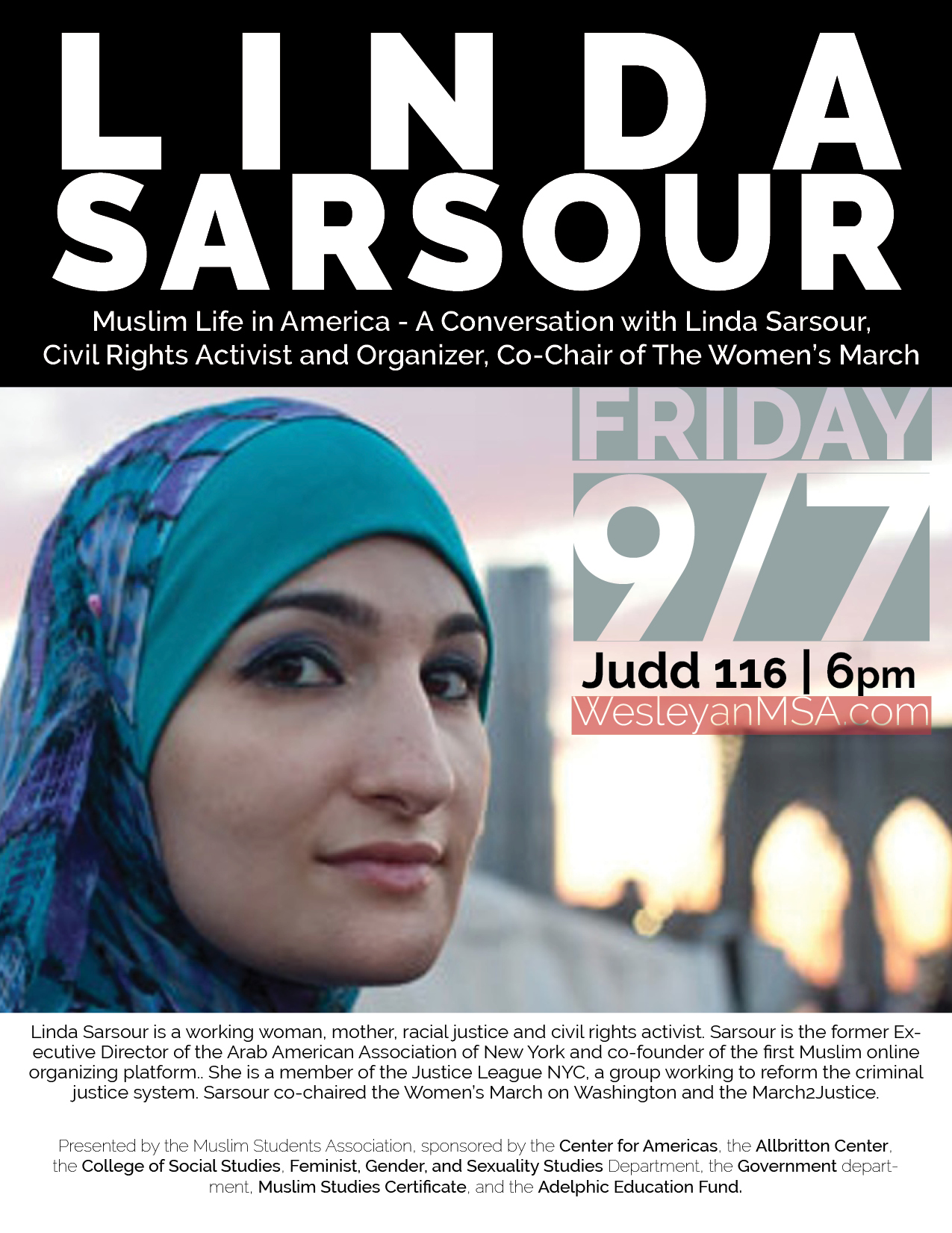 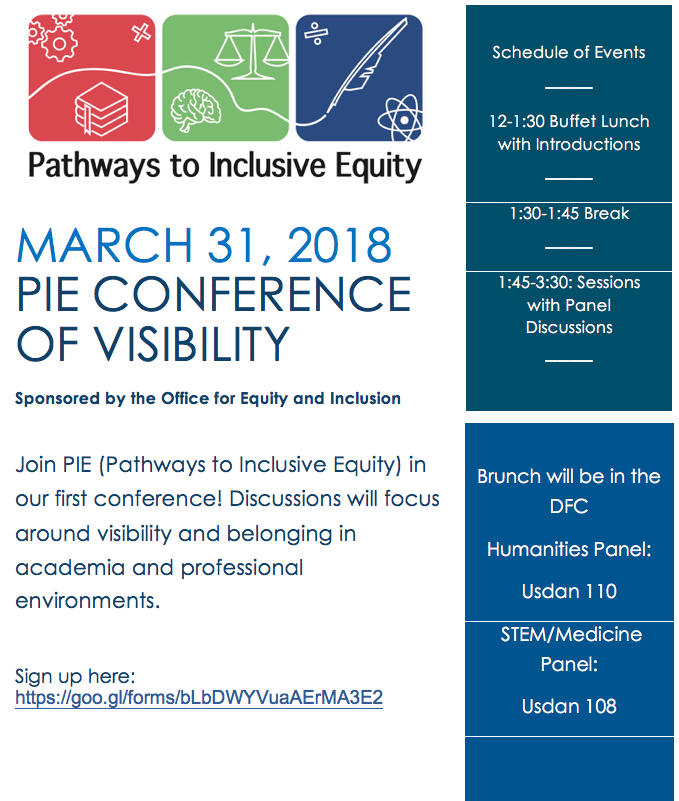 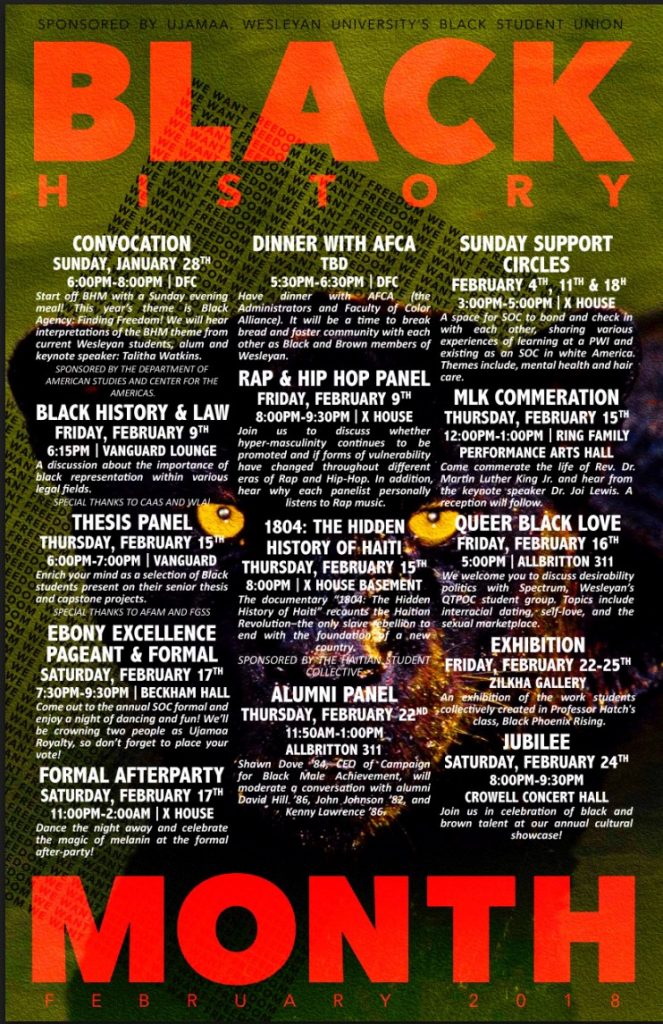 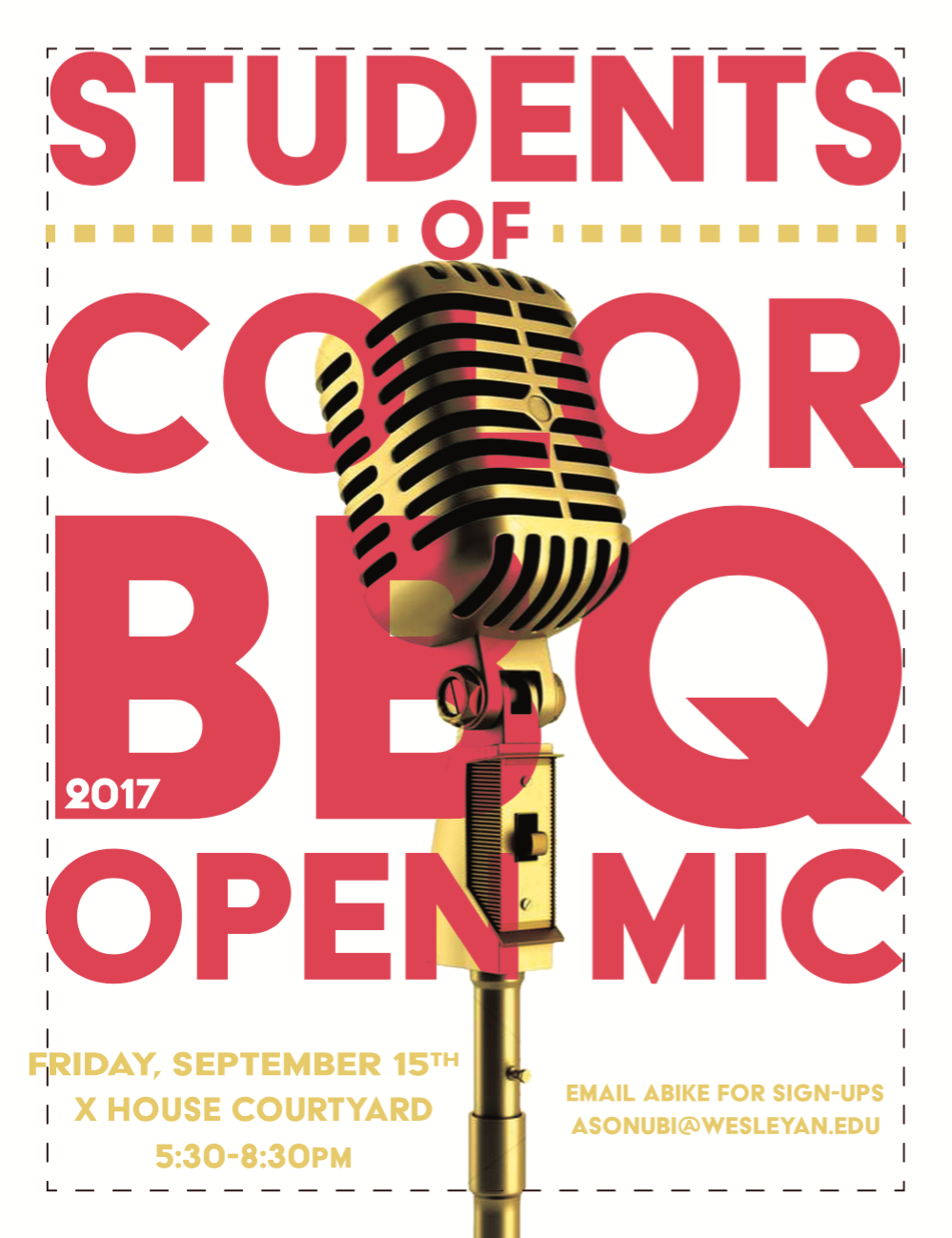 The Office of Student Affairs, The Office of Equity and Inclusion, and the 2020 Class Council would like invite all first-generation students in every class year to a reception in celebration of the end of the academic year in Woodhead Lounge on Thursday, May 4, from 4:15-5:30pm.  If you are interested in attending this event, please RSVP through this form: 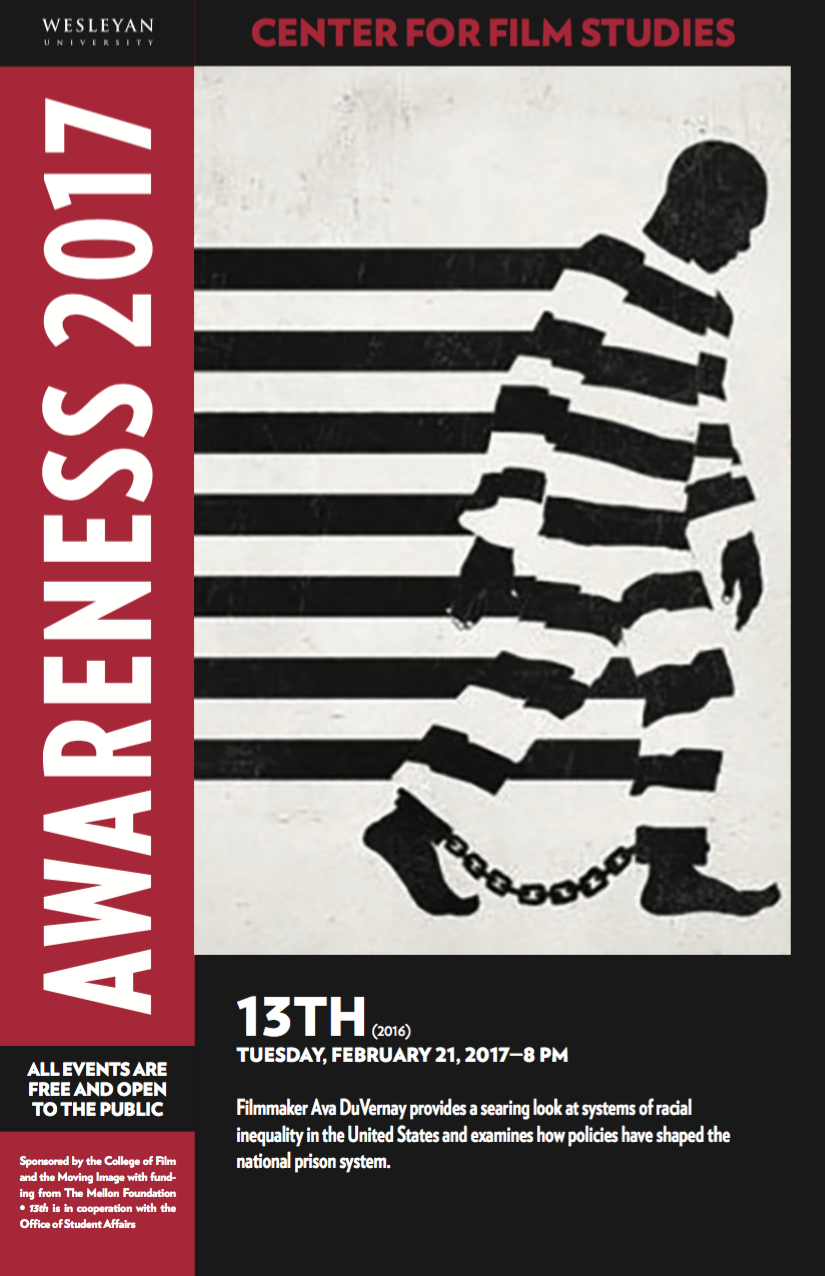 November is historically dedicated to celebrating, embracing, and appreciating Latinx culture.  This year, Ajua is on the intersection of individual experiences with Latindad. 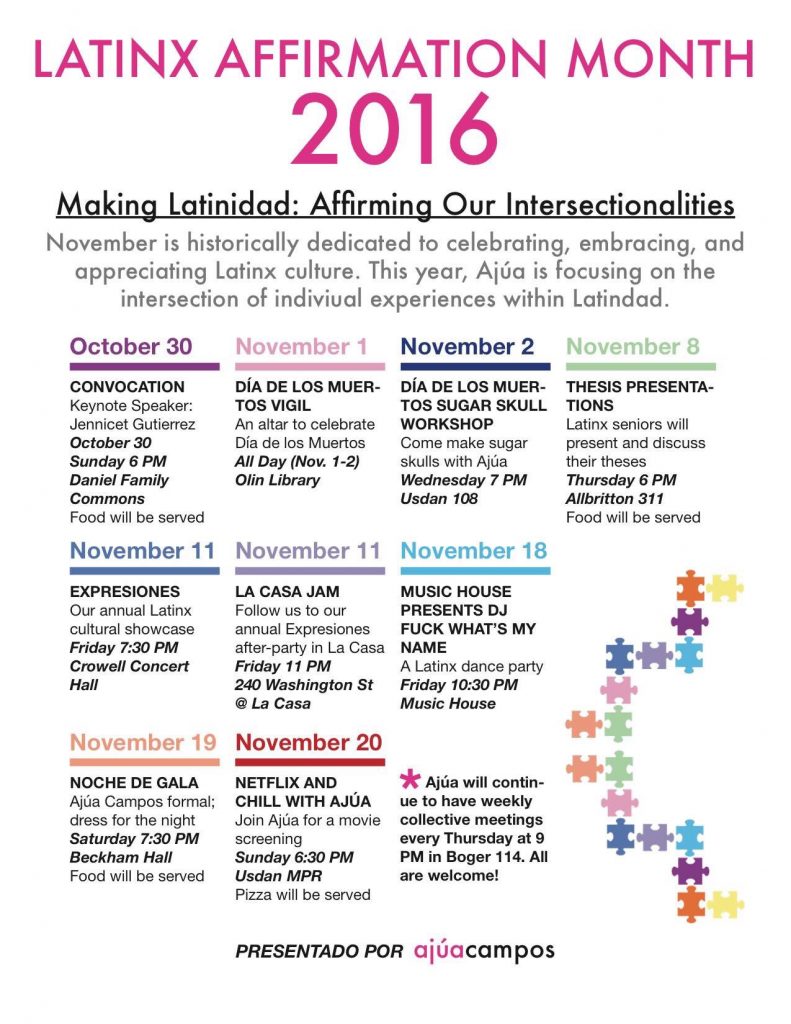 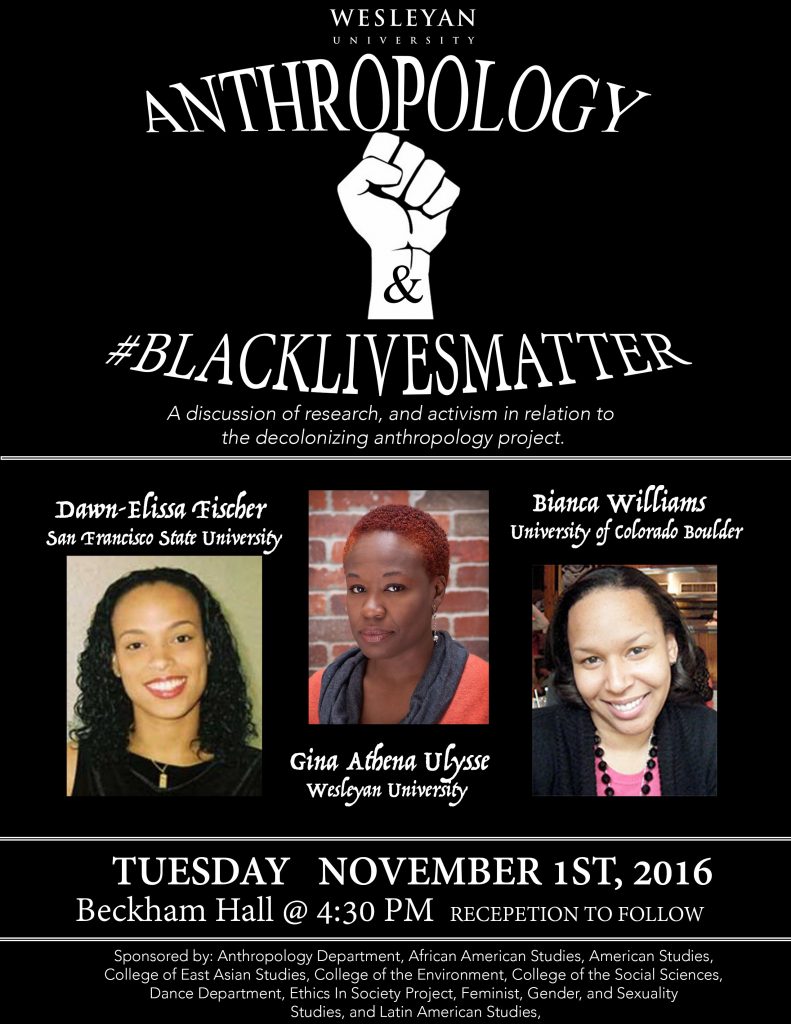