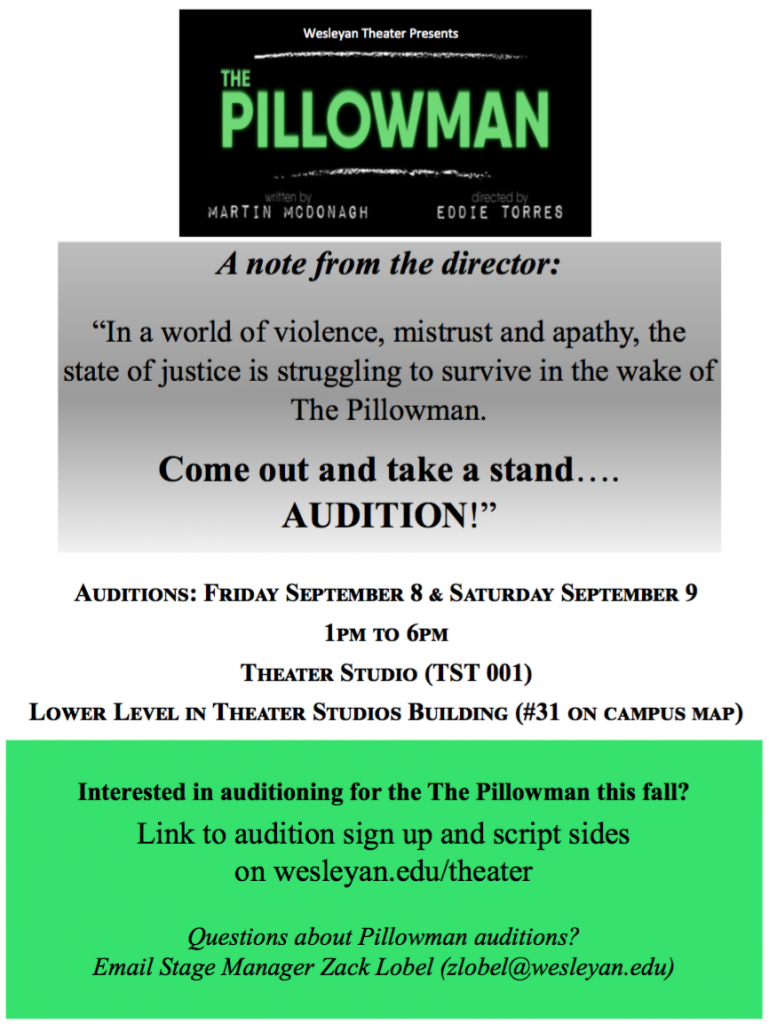 Our production this fall is The Pillowman by Martin McDonagh. Here is a note from the director, Visiting Professor-of-Practice Eddie Torres:

“In a world of violence, mistrust and apathy, the state of justice is struggling to survive in the wake of the Pillowman. Come out and take a stand…. AUDITION!”

A brief comment about the play from http://stageagent.com/shows/play/1434/the-pillowman:
“This brutal dark comedy from Martin McDonagh, the master of the horror-comedy, poses unanswerable questions: Can stories hold the power to cause atrocities? Where is the line between truth and fairy tale? Is a life of horror worth living at all? Drawing on inspiration as diverse as Grimm’s Fairy Tales, Kafka, and Antonin Artaud, The Pillowman is a dark, twisty, and utterly unforgettable masterpiece from one of Ireland’s most treasured writers.”

All students are encouraged to audition, no matter of experience or academic focus. We would like to have as diverse a pool of talent as possible from throughout the Wesleyan student community.

Provide academic instruction and support to children at Woodrow Wilson Middle School as they continue to hone their English language skills.  Help with day to day assignments and classroom activities

Student feedback is the most important tool we have to build the winter session and summer session curricula. Take the course survey before Friday (9/1) and you’ll be entered in a raffle to win a prize from RJ Julia! If you have any questions or would like to offer additional feedback about winter session or summer session courses, contact winter@wesleyan.edu or call 860-685-2005.

MUSC287 — Performing the Posthuman: Music and Auditory Culture in the Age of Animanities

This seminar engages questions of musical difference by addressing representations, tropes, and examples of posthuman performance, animal musicalities, music mimetic of nonhuman aurality, and cross-species and multi-species performance. Throughout the course we will think across varied types and categories of sounds to explore and contextualize familiar questions about how we sing, play, perform, stage, and sound musical identity, examining the intersections among the humanities, science and technology studies, and the sonic arts. “Animanities” is the name attributed by scholars to the musical response to the dilemma facing the humanities to value, take into account, and take seriously the aural and performance worlds of the nonhuman. It is necessary to include all human, more-than-human, sentient and non-sentient, machine, and animal sounding and musicking into the fields of musicology, ethnomusicology, and sound studies. By listening across different kinds of auditory culture and sounding, scholars can interrogate questions addressing how traditions of listening shape our habits of perceiving others: how we hear nonhuman animals, how we incorporate nonhuman sounding into music composed by humans, how technology has played a role in the study and development of nonhuman and human musicality, and what it means to listen to and value sonic difference more broadly. Through discussions of musical and cultural difference that enrich ongoing discussions of race, gender, and sexuality we will come to a stronger understanding of music’s role in imagined and experienced natural worlds. Topics and case studies will include the pedagogies of audio bird guides; new age nature recordings, multi-species “collaborative” performances; sampled and electronically rendered animal and nature performance in digital video games; wildlife field recording and documentary soundtracks/sound design; forms of animal and environmental mimesis used by composers; the jazz aviary of exotic songbirds and chirping canaries in the publications and reception history of the 1930s–1960s that document female jazz singers and virtuosic operatic sopranos; they way nonhuman animal behavior influenced experimental music communities; and how human musical language and terminology was used to describe the musicking of nonhuman animals in documents circulated by the National Audubon Society and other wildlife guides and field recording initiatives. This seminar draws on the classroom community’s interdisciplinary backgrounds and interests as well as readings and case studies that cross and challenge disciplinary boundaries. Students can achieve success in this course without previous musical knowledge.

The course is described here:

There are prerequisites, but, as ever, there are also prerequisite over-rides for students who have the appropriate skill set.

Greg Kotis’s webpage lists this for info about him:

Greg Kotis is the author of many plays and musicals including Michael von Siebenburg Melts Through the Floorboards, Yeast Nation (Book/Lyrics), The Unhappiness Plays, The Boring-est Poem in the World, The Truth About Santa, Pig Farm, Eat the Taste, Urinetown (Book/Lyrics, for which he won an Obie Award and two Tony® Awards), and Jobey and Katherine.  His work has been produced and developed in theaters across the country and around the world, including Actors Theatre of Louisville, American Conservatory Theater, American Theater Company, Henry Miller’s Theatre, Manhattan Theatre Club, New York Stage and Film, Perseverance Theatre, Roundabout Theatre Company, Soho Rep, South Coast Rep, and The Old Globe, among others.  Greg is a member of the Neo-Futurists, the Cardiff Giant Theater Company, ASCAP, the Dramatists Guild, and is a 2010-11 Lark Play Development Center Playwrights Workshop Fellow.  He grew up in Wellfleet, Massachusetts and now lives in Brooklyn with his wife Ayun Halliday, his daughter India, and his son Milo.

Anyone more interested in Kotis could check him out here: http://gregkotis.com/